Check out the Film School page to get more information about the workshops for young people planned for August. They promise to be lots of fun!

Click on the BUY TICKETS tab either in the menu bar on the home page or in the margin to see the exciting programme of film we having coming up.

On a bitterly cold London evening, schoolteacher Kyra Hollis (Carey Mulligan) receives an unexpected visit from her  former lover, Tom Sergeant (Bill Nighy), a successful and charismatic restaurateur whose wife has recently died.
As the evening progresses, the two attempt to rekindle their once passionate relationship only to find themselves  locked in a dangerous battle of opposing ideologies and mutual desires.

Helen McCrory (The Last of the Haussmans) returns to the National Theatre to  take the title role in Euripides’ powerful tragedy, in a new version by Ben Power, directed by Carrie Cracknell.

Medea is a wife and a mother. For the sake of her husband, Jason, she’s left her home and borne two sons in exile. But when he abandons his family for a new life, Medea faces banishment and separation from her children. Cornered, she begs for one day’s grace.

It’s time enough. She exacts an appalling revenge and destroys everything she holds dear.

As ever tickets for all our screenings can be brought in advance at:-
http://sawstoncinema.ticketsource.co.uk or contact:-
BOX OFFICE 01223 712825

Our regular Tuesday in term time programme of main stream movies returns in September with:-

Captain Phillips cert 12A on Tues 23rd at 6.30pm This film stars two-time Oscar winner Tom Hanks in the true story of Captain Richard Phillips and the 2009 hijacking by Somali pirates of the US-flagged MV Maersk Alabama, the first American cargo ship to be hijacked in two hundred years.

This film tells the story of Mandela’s extraordinary life, from his childhood in a rural village, through to his inauguration as the first democratically elected President of South Africa.

As ever tickets for all our screenings can be brought in advance at:-

Our season of regular Tuesday evening screenings continues on Tuesday June 10th at 6.30pm with:-

Later the same week on Thursday 12th June we are pleased 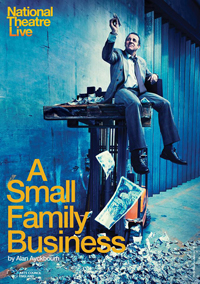 to announce another live broadcast from National Theatre Live:

A Small Family Business by Alan Ayckbourn.
Doors open at 6.30pm for a 7pm screening.

A riotous exposure of entrepreneurial greed by Olivier Award-winning playwright Alan Ayckbourn (Bedroom Farce, A Chorus of Disapproval). A Small Family Business returns to the National Theatre for the first time since its celebrated premiere in 1987, when it won the Evening Standard Award for Best Play.

We have just had our website redesigned and hope this will make it easier for people to find out information about forthcoming screenings and to buy tickets.

ASPIRE 2 is a short film which was conceived, written and scripted by pupils at Sawston Village College, working in partnership with professional film-maker, Simon Panrucker.  The result is an exceptional film of which everyone is rightly proud. The school is grateful to South Cambridgeshire Decorative and Fine Arts Society for supporting this project.

We’ve tried to keep our ticket prices as low as possible but in order to try to cover film licencing costs we have had to introduce a small increase this season. All Sawston Cinema screenings will now cost £4.00 (Concessions £3.00). Please note that different prices apply to NT Live screenings.

The summer workshops have been a great success. We’ve had three days of excellent film-making. Check out the WORKSHOP FILMS page to see what was made. We’ve got two films up from the Movie Match workshop already.

If you’d like to be added to our emailing list so you can keep up to date with what’s going on at Sawston Cinema by subscribing to our mailing list or e-mail cinema@sawstonvc.org and ask to be added.

Summer Film-making – the results are online!

We had a great day in July on the ‘Make Me a Movie Monster’ workshop and two great films were made as a result. To see these films, go to WORKSHOP FILMS and look for ‘The Monster Hunter’ and ‘The Story of Earth’. Then sit back and enjoy!